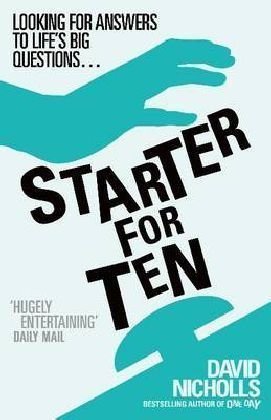 As a firm fan of David Nicholl’s commercial effort, One Day, and a committed University Challenge viewer, I embarked upon Starter For Ten with a certain optimism.  I was on the search for a campus read too, as most often, books set in colleges and universities generally can recapture easily the sense of youthful promise one feels upon matriculation.

Starter For Ten covers the initiation of main character Brian Jackson, as he settles in as a Fresher at university.  With a light touch, the author gently explores the challenges that this major life step engenders – and indeed, allows us to appreciate just how young, naive and essentially – geeky – Brian is.

Still wrestling with grief over the sudden death of his father, Brian’s membership of the University Challenge team serves as a metaphor for his pursuit of campus ‘Prom Queen’ Alice Harbinson.  Alice, the daughter of middle class liberals and a graduate of a posh liberal private school, is a polar opposite to Brian – confident, outgoing, self-promoting and all in all, carefree.  She is also, as luck would have it, a member of the team going to face UC host Bamber Gascoigne.  (Remember, this is set in 1985, long before the days of iPlayer, and Jeremy Paxman.)

Starter For Ten shows us, albeit in a surface-only way, just how confusing that first year at university can be.  Parents change as the young leave the nest ; the friends left behind, who were once our touchstone of reality and identity, become people we barely recognise, and on top of that, as we see with dear Brian, we search to establish ourselves against a backdrop of awkwardness that is typical of early adulthood.

The book trundles along quite happily through a series of set pieces ;  Brian’s disastrous Christmas visit to Alice’s family home, Brian’s catastrophic receiving of his friend from home as a guest at university (and in particular attendance at a uni party), and then of course the actual studio moment and appearance on University Challenge.  The pace is a little slow at times, and ultimately, the University Challenge sequence feels rushed and, as a result, a moment of being short changed.

In many respects, it’s tricky to recommend Starter for Ten, but tricky to entirely deride it either.  It sits in a vanilla space where one can’t call it a Campus Read in the purest sense, or a comedy read at heart.  But it is an opening bid for being a book about life’s beginnings, and perhaps a meditation on false dawns.  It’s a fun, easy read, but be warned, the settings and the characters are a little one dimensional.

Credit where it is due though, Starter for Ten is by no means a waste of reading time, and the little lad that is Brian Jackson will probably stay with you for a few months.  Nicholls’ fans on the whole though can rejoice – Starter For Ten has got to be the early college musings that would eventually mature and round out to become, of course, Dex and Em, of One Day fame.