It came to my attention last week that the Royal Opera House has recently staged an opera simply titled ‘Anna Nicole’. The work of high drama, tragic-comedy and colourful theatrics (which are the three central ingredients to any opera), covered the life of Anna Nicole Smith, a Texan glamour model who went on to marry an octogenarian oil billionaire, before enduring personal tragedy, complex legal disputes and her own final death.

Aside from celebrating the ROH’s forward thinking exploration of popular culture through the grand experience of opera, it also made me think about what dramatic sports personalities would make for an opera par excellence. What follows is my top ten, grounded in football and therefore – male dominated. However, there is a tacit implication here; let’s face it, you don’t find professional footballing women throwing diva strops in quite the same way the men do. Their absence from this list is not to be seen as a fault!

At TEN….. David, The Opera.
The David Beckham Opera needs no introduction. Split into three acts, we would move from life in Leytonstone, to the epic yet delicate years at Old Trafford, to the new era in American soccer. Invariably, the heavyweight tenor that is Sir Alex Ferguson would provide the musical highlights, with emotionally charged solo pieces. An obliging soprano would take the role of Posh Spice and an array of marketing projects would present an opera for our times: Glossy, Glamourous, and infused with the gold dust that is Brand Beckham.

This man. A heavyweight tenor.

At NINE…. Michael Owen, an Opera of Lightning Brilliance.
I’ve always felt a strange sense of both sadness and awe regarding Michael Owen’s career; and what better pillars for an opera? Opening to great fanfare and THAT goal against Argentina, the opera would follow our tragi-hero with bass and baritone commentary from Alan Shearer and a new glossy pundit called Gary Lineker. Heart breaking arias would ground this opera with an aura of fateful sorrow.

At EIGHT…. Keano; the Opera of Roy Keane.
A dark beast of an opera, riddled with complexities, angst, and the fierce examination of determination gone mad. Our central hero would dominate both stage, choir, and orchestra pit for that matter, and the opera would have the harshness of a Wagner composition as it thrashes out issues of human nature. The maestro at the head of the musical score would have him/her self explore the concepts of anger and rage, as conjured by Keano himself in his latest book, and the entire chorus would chirp and tweet unbearably, in musical tribute to the witterings of the Prawn Sandwich Brigade. A vicious, and important opera.

Roy Keane. A Beast of an Opera.

Ballotelli; Mario or Maverick?
A natural on and off stage Diva would take the starring role in this opera. The boards would be rocked to their very wooden core with the high drama of everyone’s leading Italian. The production would smack of modern soccer excess, with a slick sponsored stage dripping in logos, bling, and fancy fashion. At the heart of it all though, would be a story exploring the spirit of wasted yet exquisite talent and natural abilities, and a hero driven by passion only hindered by the naive nature of youth and the fickle friends foible and error. And the opera’s tagline? Simple; ‘Too Much, Too Soon?’

At SIX…. Messi.
Operas often have as their hallmark some element of the elite or prestigious. Either a musical star in a leading role or a pioneering conductor guiding the orchestra throughout. So it is only fitting that the Worlds Best Player would anchor an opera. With a chronological structure, ‘Messi; The Opera’ would be a football fans Carmen. Heavy Spanish undertones with Messi being interpreted by a dainty soprano capable of whipping through music with the same speed that Leo himself exhibits on the field. Within the majesty of the Camp Nou, we would watch the No 10 grow, and take time out with arias sung directly to the entire sovereign state of Argentina, rueing their suspicion of their prodigal son. Would Diego Maradona have a walk on part? Yeah! Course he would!

Maradona – a natural walk on part in the Messi Opera.

Nicolas Anelka
It would be complicated. It would be controversial. It would be made up of many acts with only an arrogant dislikable chap the common denominator for them all. Each ‘new leaf turned’ would a frustrating let down. It would get rather boring, rather quickly. The audience would lose interest. Completely. Going…going….gone.

At FOUR…David Moyes
Operatic culture would be redefined with an opening act more in line with a grand finale. The start would see the entire company bidding vocal farewell to a grand man that retires from a grateful Football Club. Hearts swell with pride as he passes the mantel onto a younger version of himself, and the air, and the music, drips with sweet expectation.

But wait! What is this? A chorus comprised of a press pack chomping at the bit, and a collection of tenor footballers are thrown into chaos; the cacophony of brass and percussion in overdrive as the new manager goes on the rampage! To the horror of both company and audience, the back room staff are dismantled; the old regimens displaced; menus are changed; fitness drills abandoned. It is a travesty! Then, the bad results begin to arrive. The once dominant team flail, a rudderless entity blown around on the ocean of football. Scuffles and personality politics emerge….it is becoming a wasteland, and whilst the tragic manager desperately claws at some idea of credibility, the knives are out and the smell of blood is in the air…

It is a tale of doomed fate, the politics of Executive Boards, and the burden of legacy which concludes with a tragic closing act and a grand, theatrical, drawn out sacking.

At THREE…. Cantona; Magnificent Seven.
An opera of sweet talent, vivacious wit and a daring opus that shocks the Opera crowds and has audiences and reviewers alight with joy like never before. The opera follows a hero who oozes bravado whilst constantly fighting to manage and suppress known demons (delightfully replicated on stage by a flock of soprano seagulls). The costumes are breathtaking as fashion and sartorial issues emerge as a concern for our main man. The entire company and the pit have their collars up for the duration of the performance, and the audience are invited to do the same. 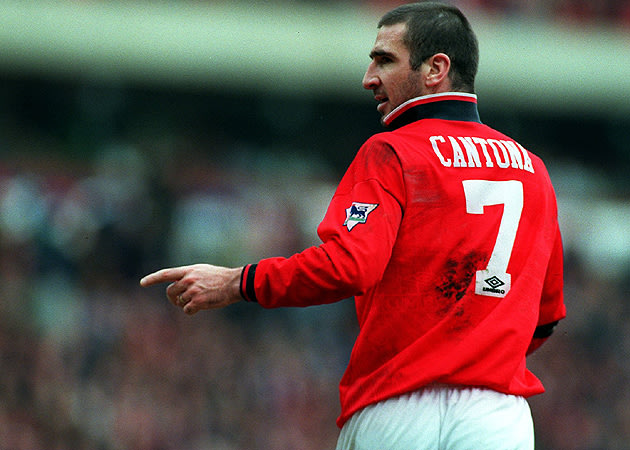 Cantona, Magnificent Seven. The opera at which even the audience would be invited to put their collars up.

At TWO….Wenger.
Arsene Wenger, The Opera, would be an exercise in poetic license – a delicate opera expressing the beauty of football and our hero’s pursuit of nothing but elegance. The opera’s principle philosophical question would be ‘At what price victory?’, and would ask if winning ugly would ever be truly winning. Does a true, pure triumph have to be seen to be perfect in every way? The era of The Invincibles would sit firmly at the centre of the opera, with plenty of heartbreaking solos ringing out, as the main character protested against referees, other managers, and dastardly opposing players. And the percussion section would have a field day as the orchestra redefined the term ‘The Gunners’.

And at NUMBER ONE…. The Opera of Wayne Rooney.
In the post new Labour era, what could be more fitting as a high brow meets low brow tribute than an opera about the truly unique Wayne Rooney? Set to a backdrop of hulking Northern Cities, the opera would open brightly as a natural talent emerges on to the field. He flits through the music at never before seen speed, his touch instinctive, his balance unrivalled, his energy as if drawn from Heaven itself. Indeed, the player has a touch of the ethereal about him (and a chorus of angels tells us so).

But alas! With a touch of the Christoper Marlowe, the No 10 is visited by dark forces that appear to run through his tempted veins like syrup….Before we know it, he is running riot, driven insane by vice. His performance takes on more force, more anger…there are undertones of Harry Potter’s internal conflict with Voldemort as he wrestles with the demons that pursue him with venom.

It is a chunky affair, and the reviewers can’t get enough. It’s the hottest ticket in town and the question on every operatic pair of lips is simple: Will he recover his form and escape the forces of malevolence that so doggedly pursue him?

And so we conclude this blog post; remember people, the opera of life is all around us… you just have to keep an ear to the (football) ground!